The best step you can take to get out of a playing rut to start improving your music skills and learn new skills is to put together a great guitar practice routine. It’s also the best way to maintain the skills you already have. It takes some work, but If you’re serious about music and becoming a better guitar player, you need to be practicing — and you need to take the extra step to create a routine for it. When practicing, the routine you are on should be focused and intentional. At the end of each successful practice, you should see a noticeable improvement in whatever technique you were working on.

The keyword here is “routine.” That means certain things we do every day and, if at all possible, at the same time. Of course, being a musician, adhering to a set practice schedule is easier said than done. So with that said, even if it’s at different times during the day, what’s most important is that you do it every day.

Once you’ve committed to a daily guitar practice routine, now what?

Before you start your guitar practice routine, determine what techniques, songs, or concepts you are going to focus on. There are so many techniques out there to learn, including songs and the whole universe of music theory — it can be extremely overwhelming, especially for a beginner. Trying to decide what you are going to practice can be like hopping on Netflix without having any idea what you want to watch. You might spend an hour or two scrolling through all the shows (maybe watch a preview or two), get overwhelmed by all the choices, and, rather than practice, decide just to go to bed instead. Here are some suggestions on narrowing down what you should be practicing.

If your goal is to become a great jazz guitar player, spending an hour trying to learn thrash-style downpicking isn’t going to serve you as much as, say, scales, chords, and chord theory for guitar. Make a list of exercises that move you in the direction you want to go in stylistically, and within songs, you actually want to play. This applies whether it’s new techniques or music theory.

For the exercises in your practice routine, work on songs and techniques that you are unable to play. Someone who can cleanly play alternate picked, sixteenth-note scales at 300 bpms on guitar doesn’t need to focus on alternate picking exercises as much, however, his legato playing might be lacking. Find out what part of your playing you’re weakest at, then build your guitar practice routine around that.

The sky’s the limit on what you can accomplish on guitar, but if you’re a beginner and start with something that’s too hard to play, it can be so deflating you might want to give up playing. On the flipside, if you set the bar too low for yourself, you might not make much progress in your playing. It should be challenging to play, but also achievable within a reasonable amount of time.

It’s a good idea to set aside at least an hour each day to dedicate to guitar practice (this may require you to watch a little less Netflix.). Also, you should have determined what songs, scales, chords, or techniques you want to work on. Maybe it’s scales or chord progressions; trying to play difficult Steve Vai solo, or mastering one of your own compositions. Whatever it is, an hour of practice those exercises should be enough to get your playing where you want it and achieve it within an acceptable time frame.

Focus on areas where you really struggle. For example, if you are trying to play a particular guitar solo or lick, narrow it down to only the parts you physically aren’t able to execute. While it’s tempting to want to run through songs from beginning to end each time, this isn’t efficient. Find the particular music passage that is giving you trouble and focus on it. This will help you as a guitarist to get up to speed quicker than just trying to muscle your way through the entire musical passage.

Once you have isolated the problem area, figure out which technique is being used. Is it a legato run, or alternate picking pattern, finger tapping, etc.? Basically, this will establish what your focus will be on for that practice hour.

Avoid using any other techniques during your practice routine at first. Similar to how weight trainers will focus on a specific muscle group each day, you want to devote the time from each session to a particular technique to maximize your progress. Of course, there can be those days where you do a circuit training approach, where you might play multiple techniques, but for the most part, keep the focus on only trying to learn one skill at a time. To keep it interesting, find different songs with the same lick or scale, or try practicing it over different chords and chord changes.

Once you begin to have a grasp on the technique you’re trying to play, you can start mixing it up with other techniques and within songs in your future guitar practice routines. This will help integrate it into your existing playing style and allow you to call it up quickly during improv situations.

After you have isolated the musical passage and technique, the next part is repetition. To continue with the weight lifting analogy, you will want to do the musical equivalent of exercise reps. That involves running through the same pattern several times, with short rests in between.

The purpose of repetition is another way to integrate the technique into your musical repertoire. Repeat it to the point where you can instantly pull it out without even thinking about it. The more repetition you do now on a particular technique, the less thinking about it you will have to do later.

During this step, it’s extremely important to start slowly, then work up to speed. The tempo should be set where you are able to play the exercise without any mistakes. Focus on being clean and precise. Be aware of the movements; you should be relaxed and fluid — the speed will come.

This is the fun part. Most of us picked up the guitar because we want to express ourselves musically. Your guitar practice routine should not have to exclusively exercises, and, dare I say, “routine.” After you have isolated the technique that you are going to focus on, take some time to create your own musical passages. If it’s a scale you’re working on, try connecting it to another scale in the same key. Try it with different chord patterns that using that scale or technique. This keeps things interesting by bringing in different chords and key changes, and reinforces the technique, helping it become part of the muscle memory.

During this part, try integrating other techniques. For example, if you’re working on alternate picking, use this as an opportunity to combine it with sweep picking, or some legato runs. See what kind of interesting combinations you can come up with.

This is a great way to start establishing your own unique playing style!

While this last part isn’t officially part of the guitar practice routine, it is important as a mindset. Getting good and improving your skills can be a lot of work. You can experience frustration, setbacks, and in some cases, actual pain. That said, the discomfort you experience in your journey to become a better player is inevitable, but necessary. Pain and frustration are actually signs that you are making progress.

It’s important to develop the self-awareness to recognize these signals and make the decision to keep pushing forward and push through the pain. When you do, you will find that all that frustration was worth it and it will show in your guitar playing.

If you aren’t experiencing any discomfort then you’ve set the bar too low — switch your settings from “easy” to difficult and push yourself!

Sticking to the routine

Putting a guitar practice routine together is difficult, sticking can be harder. Some of us don’t have an hour to set aside or we get distracted easily — maybe we’re afraid of commitment, or whatever. That’s understandable, even the most dedicated can find themselves struggling on occasion.

Here are a few things you can try to help yourself stick to your guitar practice routine:

Eventually, your guitar practice routine will become a habit. When that happens, you will magically start finding more time to dedicate to it; results come quickly, songs will be easier to learn, and you will find yourself reaching more and more milestones. It all begins when you stop making excuses and start putting in the work.

To learn more about how I divide my practice time, watch this free Guitar Hacks course: How to divide your practice routine time. 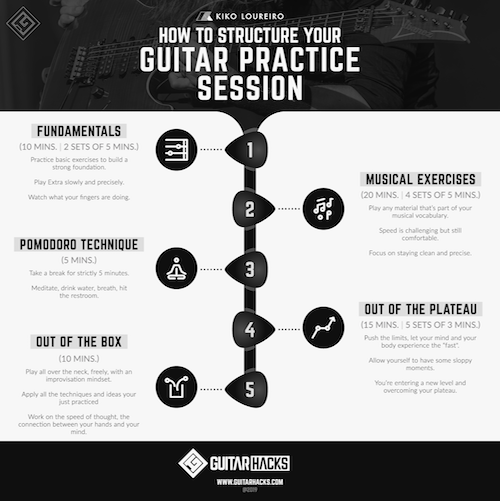